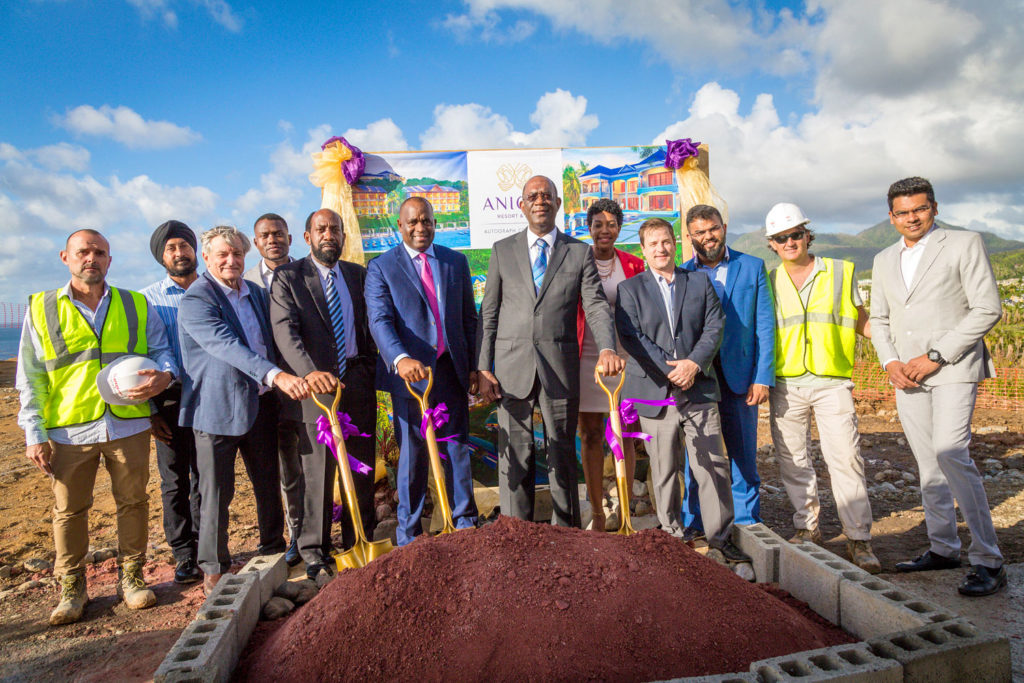 The event, which occurred at the resort’s construction site in Picard, Portsmouth, emphasised the development’s intent to add sophisticated room stock to Dominica’s tourism industry, offer employment opportunities to Dominicans, and inject much needed revenue into Dominica’s recovering economy.

Anichi, which pays homage to the country’s indigenous people, the Kalinagos, as well as Dominica’s culture and history of resilience, is being developed by well-respected Dominican lawyer, Alick Lawrence, who is recognised as the country’s longest serving citizenship agent.

The Portsmouth native, who heads Anichi Development, sees the resort as a symbol of hope for the island following the ravages caused by Hurricane Maria in 2017.

“We see this project as part of the recovery effort through the employment it is creating for our people, but more importantly, through the message of optimism that it conveys,” Lawrence said.  “Dominicans are not daunted; we are not defeated. We will rise again.” 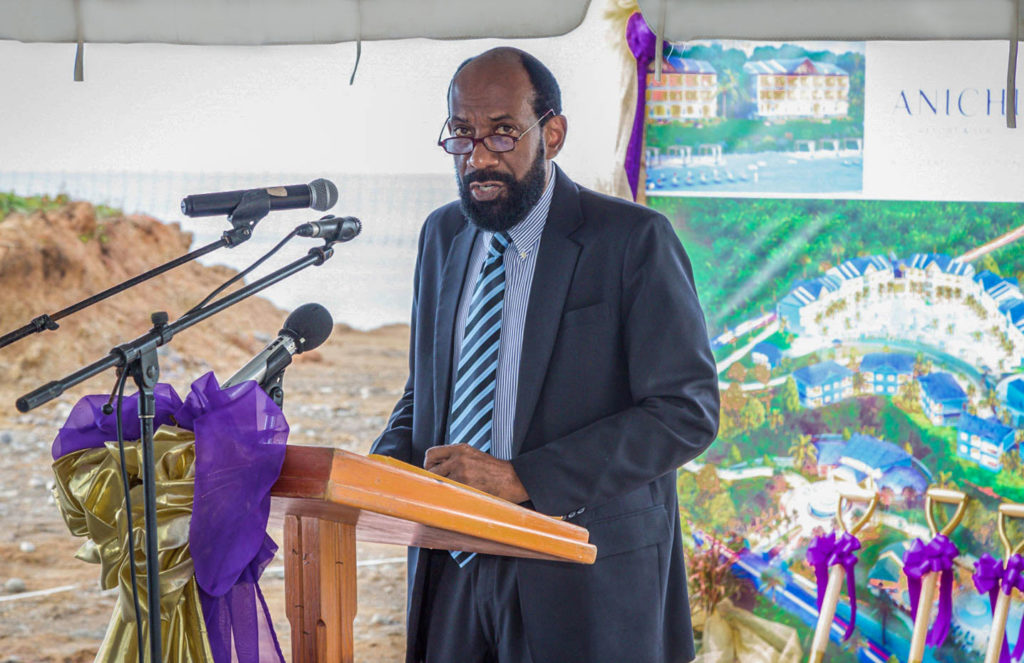 Chief Executive Officer of Anichi Development, Alick Lawrence, credits the Citizenship by Investment Programme for circulating money in the economy

Lawrence, who openly pledged his support to the country’s Citizenship by Investment Programme, and to the government for maintaining the integrity of the programme, credits it for benefiting “every aspect of Dominican life – whether health, infrastructure, the National Employment Programme, medical assistance, student assistance, and housing, to name a few.”

In-fact, Lawrence boldly stated that all Dominicans, whether directly or indirectly, benefit from the programme – particularly because of its apt for circulating money throughout the economy.

Anichi Resort & Spa, formerly known as Silver Beach Resort & Spa, joined forces with the world’s largest hotel brand, Marriott International, in 2017 – a rebranding exercise that led to an overhaul of the property’s architectural plans, resort name, and overall brand story. On hand to witness the event, and to validate the confidence placed in the project by its parent brand Marriott International, was Marriott’s Area Director of Operations for the Caribbean and Latin America, Brock Hochhalter. 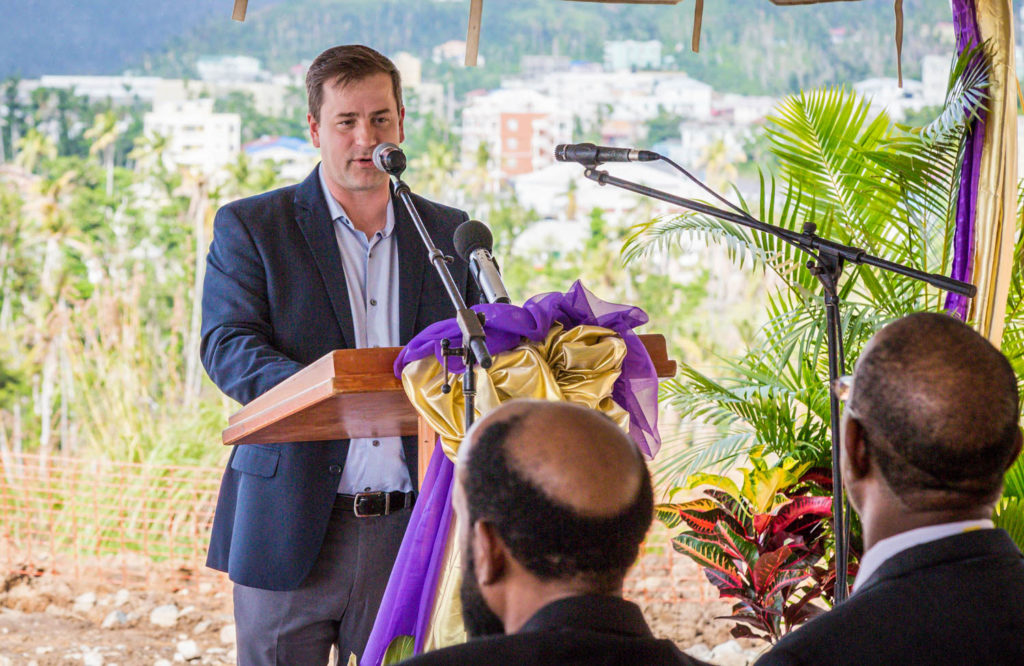 Hochhalter, who revelled in the beauty of Dominica’s landscape and rivers, expressed his company’s excitement to see Anichi become a “great example and representation of what the Autograph brand is – exactly like nothing else.” Hochhalter even ventured to say that there would be no better place to have the brand “than at this location with this amazing view, and on this amazing island.”

According to the Area Director, Anichi was chosen to be an Autograph Collection hotel because of the ability of its individual location to drive the heart and spirit of what the resort stands for. Echoing Lawrence’s sentiments about the value of the partnership, Hochhalter too stated that the partnership and enterprise “will also work hard to bring growth and opportunity back to Dominica.”

Although the resort will carry Marriott’s Autograph Collection brand, the day-to-day management of its operations will be overseen by Trust Hospitality – a leader in the management of lifestyle branded properties in the Americas. Michael Register, the Director at Trust Hospitality, stressed his company’s ability to manage properties of the Autograph calibre, and vowed its commitment toward operating a successful product.  “We are determined to create a great work environment here; to help train people and help create a very successful project.”

Register, who was also on hand at the company’s brand unveiling event in 2017, is no stranger to Dominica, and has been traveling to the island for seven years. Register sees the island as having a clean slate and the Anichi-Marriott partnership as a chance to do something great.

“You’ve picked the right brand. Marriott is the biggest in the world,” Register said. “They will bring customers here. They will help Dominica become discovered and the quality of customers that are going to come to the Anichi Autograph are going to be high-end customers that will spend money.” 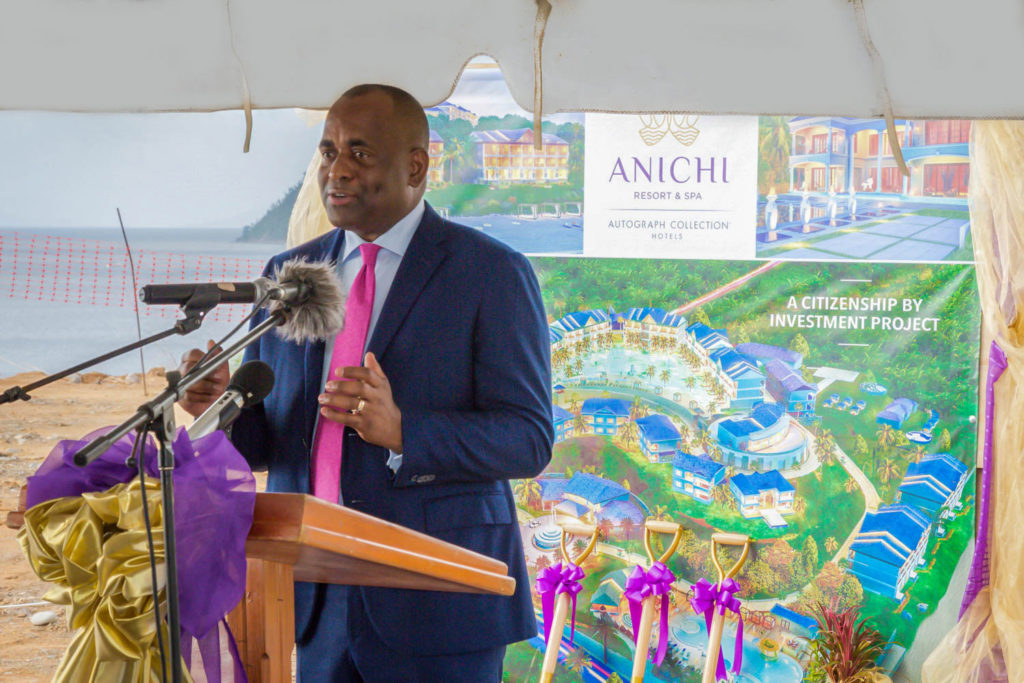 Having Marriott International and Trust Hospitality present in Dominica is indicative that Dominica’s tourism will continue to grow from strength to strength said the country’s Prime Minister, Hon. Roosevelt Skerrit. “These are two well respected, international brands, and they do not place their names on any, and all developments. Having been satisfied that this project and the developers passed the test, they have ascribed their names to it.”

The Prime Minister, who believes the real estate component of the CBI Programme gives Dominica a chance to expand the economy in a practical and tangible way, praised Anichi Development for taking the initiative to bring a massive development, such as Anichi Resort & Spa to the town of Portsmouth. “This is something, which the government has been calling for Dominicans to be part of – empowering themselves to bring some diversification to the economy –  to create jobs; to create wealth for the citizens of Dominica.”

Skerrit, who referred to Lawrence’s actions to develop Anichi as “a genuine commitment, not only to the town of Portsmouth, but to the entire country,” volunteered his person to help market and push the project internationally, so that it can be realized as quickly as possible.

Although the official ground-breaking ceremony for Anichi Resort & Spa happened on February 7, work on the site actually began in 2017, and workers are currently engaged in laying the foundation for some of the resorts junior suites. 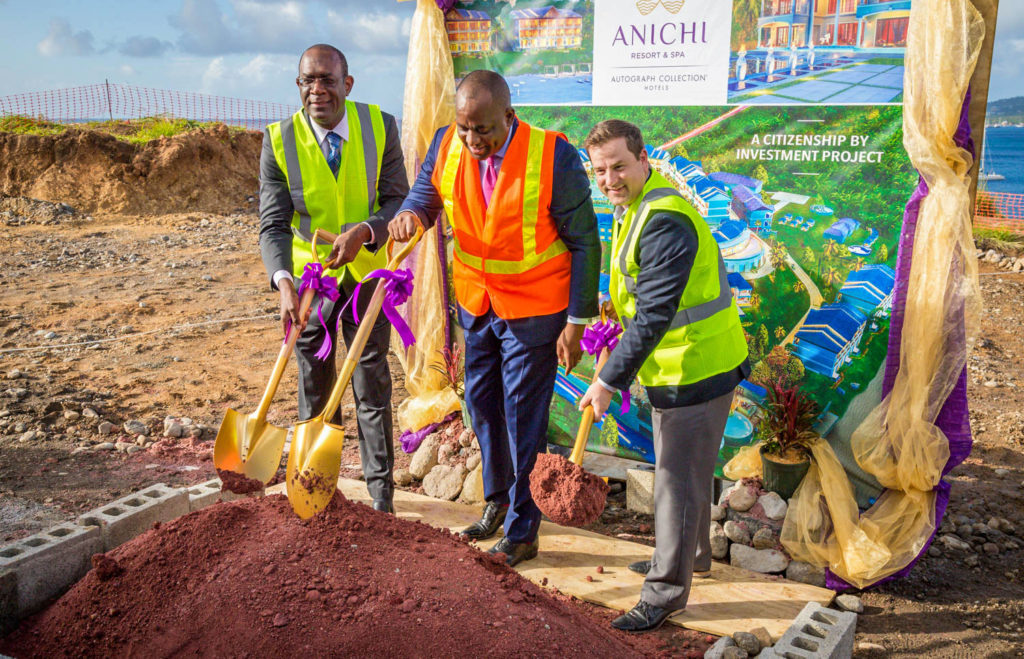