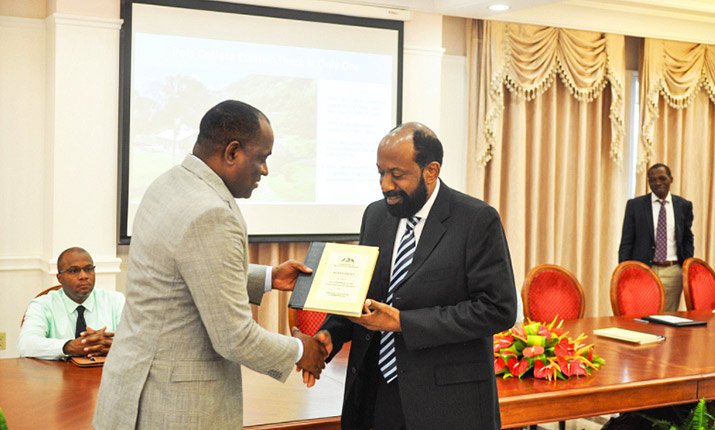 Silver Beach Resort and Spa, a 200-room, luxury, five-star resort to be built in Picard, Portsmouth has been officially included as a real estate project in Dominica’s Citizenship by Investment Programme.

The agreement with the Government of Dominica was officially sealed at a signing ceremony at Dominica’s State House on September 5. The resort, which is being developed by Oriental Developers (Caribbean) Ltd. was approved for inclusion in Dominica’s Citizenship by Investment Programme in 2015, but had yet to formally sign its agreement with the government.

Oriental Developers (Caribbean) Ltd. is headed by Dominican native, and senior counsel, Alick Lawrence. Lawrence is no stranger to the field of Citizenship by Investment, having himself dedicated over 15 years of his professional legal career working with programmes in Dominica and in St. Kitts and Nevis.

Hon. Roosevelt Skerrit, prime minister of Dominica, called Lawrence “the most knowledgeable in the country on matters relative to the Economic Citizenship Programme,” during his address at the signing ceremony.  The Prime Minister also commended Lawrence for having created a strong team to oversee the implementation of Silver Beach Resort and Spa. He is his confident that all developers, including Oriental Developers (Caribbean) Ltd. will “carry through on the terms and conditions of the agreement.”

Skerrit, who stated that his government has been engaging developers, with the view of brining in foreign direct investment into the country, believes that projects, such as Silver Beach Resort and Spa, will not only create hotel rooms, but more jobs in the economy.

At a room count of 200 rooms, Silver Beach Resort and Spa is expected to have significant impact on the island’s job market.

“We are informed by the experts that a hotel of this class will require the employment of a minimum of three persons per room. This means 600 employees when we are fully operational,” Lawrence said at the ceremony.

“Our impact will also be felt through the purchase of local goods and services such as fresh fish, fresh fruits and vegetables, tour and taxi services, and entertainment and cultural services, to name a few. “

Silver Beach Resort and Spa is the only approved project in Dominica Citizenship by Investment Programme offering investment options in both shares and in full-titled units. Construction is expected to begin in the first quarter of 2017.