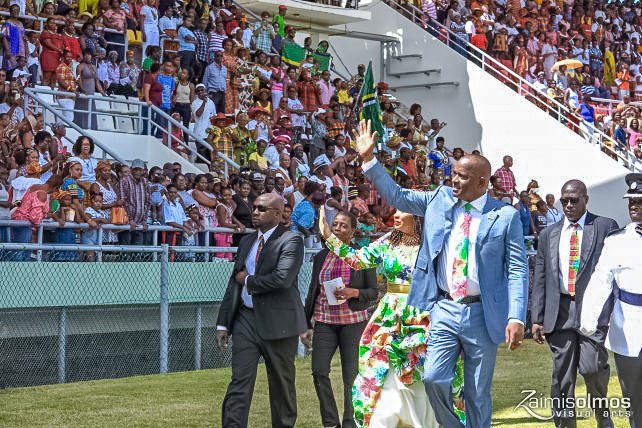 On September 18, 2017, history was made when the strongest hurricane to make landfall in the Caribbean affected the island of Dominica. When images of Hurricane Maria’s impact on the island emerged, many wondered how would Dominica recover. One year later, the people of Dominica are proving to be resilient in their response to the disaster and are striving to be leaders as they work to develop the first climate resilient nation.

Building a Brighter Future Together

Less than three months after the passage of the storm, Dominica was on the road to recovery with an average 80 percent mobile telecommunication service restoration island wide. Water and sewage services had been restored to 61 percent of the population and everyday businesses had started to resume. The number of displaced people living in shelters started to decrease in November 2017 according to Chief Environmental Health Officer Ferdinia Carbon at the November 20, press briefing.

The resilience of the nation was apparent not only in the restoration of infrastructure but also in the spirit of the people. On November 3, 2017, thousands of Dominicans came together to celebrate Dominica’s 39 years of Independence. In his address at the National Day Parade, Prime Minister Roosevelt Skerrit, stated that ‘Difficulties envelope every aspect of life, uncertainties swirl; and we are still standing! The outside world wondered aloud whether this is the kind of devastation from which you don’t recover. We are still standing.’ The National Day Parade displayed the traditional dress and dances of Dominica and proudly presented the culture of the island despite the recent disaster. Caribbean Community (CARICOM) Secretary General ambassador Irwin LaRocque congratulated the country stating that ‘The unity and togetherness of the Dominican People will ensure that no climatic event can conquer their spirit.’

My Love, My Home, My Dominica: Building a Resilient Nation

Dominica is once again preparing to celebrate independence under the theme, My Love, My Home, My Dominica: Building a Resilient Nation. One year later the island has seen tremendous recovery since the passage of Hurricane Maria. Mobile service coverage is now fully restored on island and water and sewage services are now restored to 98 percent of the population. The Dominica Electricity Services has announced that 97 percent of the customers have access to the national power grid.

International organizations have repaired 12,900 of an estimated 25,447 homes that were damaged. The Discover Dominica Authority (DDA) reports that the majority of the remaining 12,547 have been repaired privately by homeowners. Private homeowners also received assistance from an investment of over $55 million in the housing sector by the government of Dominica, as well as other investments from development partners and friendly governments. Furthermore, a revised building code was published by the government of Dominica that establishes building structures that can endure climate related disasters. All primary and secondary roads are accessible on island with repairs and rehabilitation of bridges and roads ongoing to withstand disasters.

Tourism, the main industry of Dominica has also made great strides in recovery with the first cruise ship to visit Dominica arriving in December 2017. To date the cruise season has resumed and seen growth with the return of major cruise line brand Carnival Cruise Lines to Dominica. The DDA states that 42 of 45 main tourist attractions are open and all road networks are accessible.

The Dominica Hotel and Tourism Association reports that of the pre-Maria total of 1,000 total exportable rooms, 57 percent is now available. Executive Vice President of the DHTA, Kevin Francis, estimates that the room availability will increase further as the tourism season draws nearer. An additional 340 rooms are expected to open in 2019 with the completion of hotels in Portsmouth inclusive of Anichi Resort & Spa.

The resilience of Dominica perseveres as life reverts to normal. Dominica and the Dominican diaspora will come together to celebrate 40 years of independence with little change from the traditional celebrations. September 30 will kick off the Independence celebrations with a full schedule of cultural competitions and displays inclusive of the popular World Creole Music Festival. Anichi Resort & Spa joins Dominica in commemorating the country’s 40th year of independence with the 40-In-40 social media campaign. The campaign celebrates Dominica through visual stories depicting the illustrious past and impressive initiatives of the last forty years.